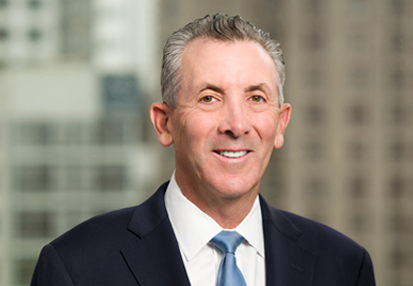 Jim Grien joined TM Capital Corp. in 2001 and, since 2008, has served as the firm’s President and CEO.  In addition to overseeing TM Capital’s management and strategic direction, Jim leads many of the firm’s most noteworthy relationships and transactions.  Over the last decade, Jim has personally led teams at TM Capital that have completed over 50 engagements, including complex merger transactions, multifaceted financings and high-level Board advisory engagements.

For over two decades, Jim has served as a Trustee of The Marcus Foundation, which is funded and chaired by Home Depot Co-Founder, Bernard Marcus, to pursue the Marcus family’s philanthropic mission.  Jim serves on the Board of Directors of Micromeritics (controlled by SFW Capital), one of the world’s leading developers and manufacturers of particle measurement instruments; Engelman Baking Company (controlled by Shoreline Capital), one of the leading institutional baked goods brands in the Southeast; Keystone Screw, a growing domestic manufacturer of specialty fasteners; and EarliTec Diagnostics, Inc., formed by Emory University, the Marcus Autism Center, CHOA and the Marcus Foundation to commercialize a groundbreaking diagnostic tool for early detection and monitoring of ASD.  Jim also serves on the Board of Councilors of The Carter Center, founded by Jimmy and Rosalynn Carter in partnership with Emory University, with a core mission to safeguard human rights and alleviate human suffering globally.

Jim is a Director, Audit Chair and Treasurer of The Georgia Aquarium, the world’s most spectacular aquatic attraction, a co-founder and current Advisory Board Member of Hands On Atlanta, a Trustee and past President of The Temple and a Director of the Westside Future Fund.

Jim’s wife, the former Lauren Gold, is a non-practicing attorney and peripatetic civic volunteer who has had a transformational influence on numerous organizations in Atlanta.  Lauren and Jim have five adult children (including two sons-in-law) and three grandchildren.  In addition to his passion for his family and TM Capital, Jim is a lifelong golfer capable of occasional good play, an obsessed (and generally suffering) fan of local Atlanta professional and college sports, as well as an avid reader and traveler.