August 15, 2013 – Mergermarket interviewed Managing Director Brad Adams in their latest publication, Deal Drivers EMEA and Americas, Half-Year 2013. The report provides an in-depth review of M&A activity for the first half of 2013, offering key insights into how announced deals of H1 2013 will impact M&A for the remainder of the year. Adams reviews expected M&A deal activity in the New England region for the second half of 2013 in the article found on page 58 of the PDF below.

Additional highlights of the report include: 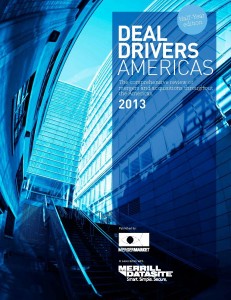